I admit to feeling like I am illegally breaking in at the London Transport Museum’s ‘Hidden London’ exhibition, so brilliantly have they recreated the feeling of an abandoned Tube station. It is very authentic, complete with construction barriers, gaffer tape and forgotten coffee cups. You could quite easily be fooled into believing you have entered the abandoned Tube station at Aldwych just down the road.

Can you spot the coffee cup? 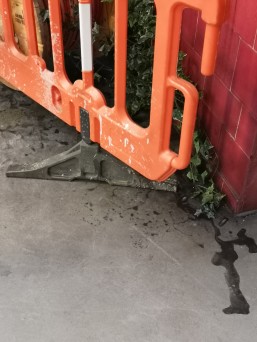 Even random stains on the floor…

The exhibition focuses on abandoned, disused, and reused London Underground spaces and you get to fill in the gaps with the stories you know and discover new stories that you knew nothing about. I love the architectural drawing of the Aldwych station from 1906 that greets you in the entrance. Originally opened as Strand Station the old name is clearly crossed off as it was rebranded in 1915. The beautiful script and elevation detail highlight how architectural plans can also be works of art.

Strand Station was renamed in 1915. 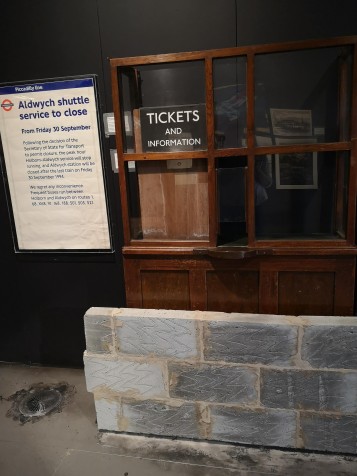 Aldwych was closed in 1994 as economic pressures finally saw to its demise, the £3 million price tag for replacing the lifts could not be justified for the 450 people using the service a day. 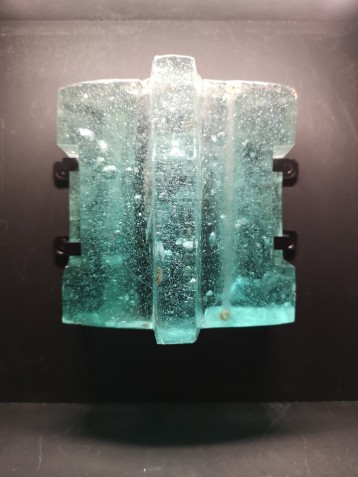 These were retrieved in the 1980s.

I knew nothing about King William Street, the City & South London Railway’s first electric tube railway that was opened in 1890. The tunnel to King William Street was abandoned in 1900 as platforms at the terminus were pointing in the wrong direction! A story that fits into a lovely long line of transport white elephants including Bendy Buses and Garden Bridges.

I really like the Daily Mirror press cutting from 1930 advertising the abandoned platform for sale, they would no doubt have had no trouble selling it these days repackaged as a ‘Brexit Bunker’ to hunker down from an uncertain future. 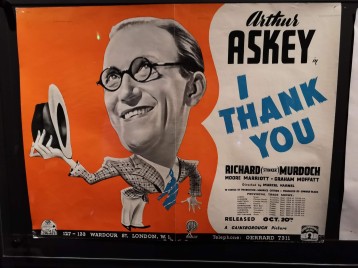 Film still from The Battle of Britain 1968

There is a section on underground stations used in film productions and unsurprisingly London Transport refused permission for a 1935 comedy thriller ‘Bulldog Jack’ to be filmed on the premises as it featured a runaway Tube train. Producers circulated rumours they filmed at a disused station without permission – an ingenious way to garner extra publicity. 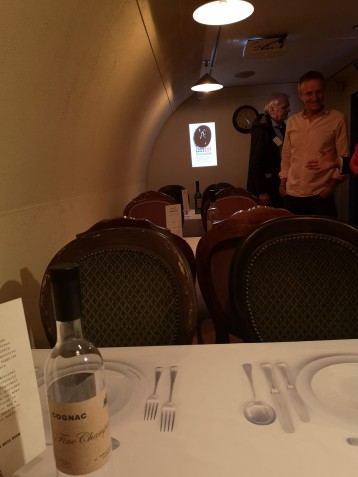 Love it or hate it…

A fascinating section on Winston Churchill explains his use of Down Street in Mayfair opened in 1907 and closed in 1932. The station secretly house the Railway Executive Committee and you get the opportunity to sit in a replica dining room, I will admit to being very intrigued by ‘Petite Marmite’ on the executive mess room menu. 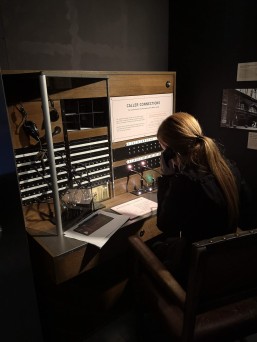 Have you got what it takes?

I attempted the Telephone Exchange Operator challenge but I appear to have failed in keeping some lines open for emergency calls, perhaps that career in war time would have been a struggle for me.

The wartime factory had 2,000 staff

I was surprised by some lovely artwork on display, I particularly enjoyed Frank Dobson’s 1944 ‘An Escalator in an Underground Factory’, reflecting women workers like those at Plessey who worked in tunnels at the eastern end of the Central line during the Second World War. Also the intertwined limbs of John Buckland Wright’s 1940 ‘Tube Shelter No.2’ which is a beautiful evocation of a moment in time.

Although sheltering in the tunnels during air raids is well known there are some lovely  exhibits that flesh out the reality of the experience including the restrictions on shaking your bedding out over the platforms.

The exhibition is perhaps best summed up by one of the very first artworks you see of a sectional drawing of Charing Cross station by Donald MacPherson in 1929. Above ground is the bright business of day to day London; office workers, city dwellers and tourists. But underground is the dark underworld of the network where all the hidden stories, histories and secrets are kept. 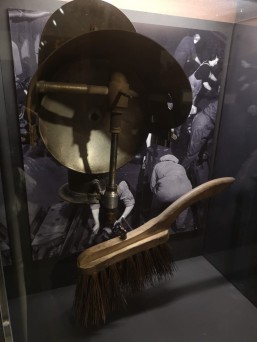 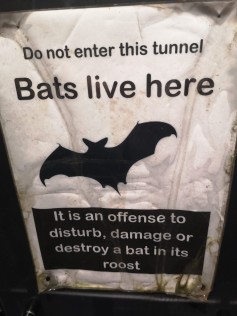 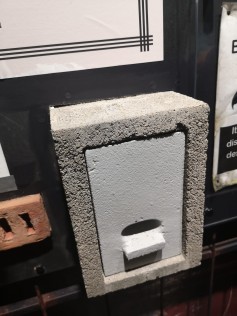 Bat Brick built into the tunnels. 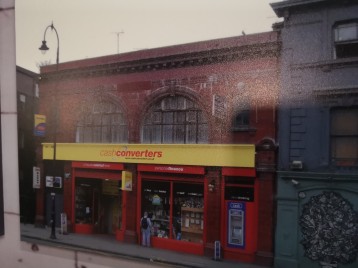 ‘Hidden London’ reminds us of why the underground network is so synonymous with London. There is our history to be discovered with stories of Churchill and War, of taking refuge and the indomitable spirit of Londoners. There are strong women’s stories too easily overlooked, women who worked the factories and women who cleaned the rail’s with their ‘fluffers’. There is our imagination and creativity with films and beautiful designed tiles, stations and clever engineering solutions to getting around London. There is continual change, re-use, re-purposing and adapting. Underground stations as cash converters, bookshops, farms and homes for bats. That is London, forever changing and evolving but underneath it all, the strong threads of history running beneath our feet and Hidden London gives us a chance to pick up those threads, thoroughly enjoying finding where they lead.

Hidden London is on at the London Transport Museum from 11th October – Autumn 2023. For opening times and ticket prices please see the website – https://www.ltmuseum.co.uk/whats-on/exhibitions/hidden-london

Getting a moment with #Bowie
New on the blog Amy: Beyond the Stage @designmuseum a celebration of Amy Winehouse 10 years after her death.
New on the blog for 2022 - contemporary collecting with @museumoflondon with their new ‘London Making Now’ exhibition.
My new blog for the @thecartoonmuseum is an interview with author and artist @zaraslattery on her amazing award winning graphic novel #Coma.
Loved seeing familiar London spaces transformed. #Borealis at the #Guildhall by Dan Archer.
One of my favourite museums, @bethlem_museum new exhibition is all about artist and cat obsessed illustrator #LouisWain 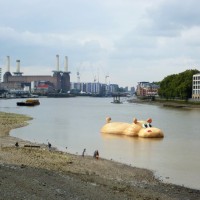 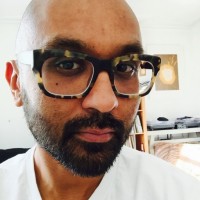